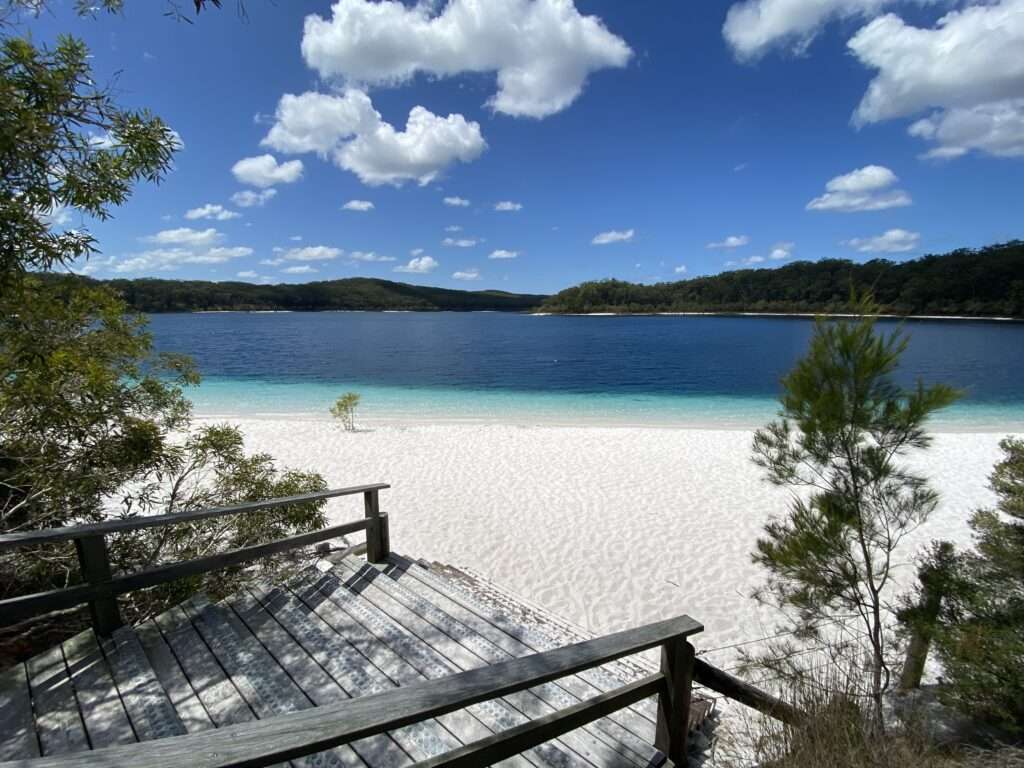 Fraser Island is the world’s largest sand island and, with practically no development, it is a truly fantastic experience when you head off for 2-3 days in a 4 wheel-drive to explore the pristine creeks, freshwater lakes and lush rainforest.  Plus, it is all interlinked by the magnificent eastern stretch of beach that runs the near full 120km / 75mile length of the island and acts as the “highway”.  Lake McKenzie, with its clean mesmerising colours, perfect white sand and backdrop of the rainforest, is worth the trip alone.  The highlight experience of Queensland, if not all of Australia, and a must for an East Coast visit

I’ve written a few tips below, but my biggest tips are to give yourself at least 2 days, ideally 3, and to rent a 4×4 rather than taking a tour.  The day tours can be good (I’ve done one before and we still had a great time), but there is something wonderfully adventurous about renting a 4×4 and heading off across the island at your own pace to go exploring.  Its a very accessible chunk of paradise, so very easy to do

Port Arthur is the most infamous of British penal colonies as it was the destination for the most hardened criminals, re-offenders after having been transported to Australia, and for the physiological techniques used to try and discipline prisoners.  For these reasons, it was acknowledged as a UNESCO World Heritage site in 2010 and many of the original buildings from the mid 1800s remain in good condition.  In addition to its infamous reputation, Port Arthur is also synonymous with the 1996 Massacre when one man shot and killed 35 people in what is still Australia’s worst mass shooting

Although it’s quite far down the list of experiences in Tasmania, in particular the amazing natural wilderness options, it is a staple place to visit on a trip to Tasmania, is easily accessed with a 1.5hour drive from Hobart and has some lovely gardens

Regularly voted one of the world’s best beaches, Wineglass Bay within Freycinet National Park is about as perfect a setting for a beach as you can get and the highlight beach for Tasmania.  Its a bit difficult to access, which makes sure that tourist numbers aren’t hectic on the beach itself, but you can easily walk the 30mins or so from the main road and car park up to the Wineglass bay lookout that will give you the famous view.  Biggest tip though – continue on to the beach.  We turned back at the lookout because it looked quite a way further to get to the beach and had run out of time that day, but its only another 30-45mins walk to the beach and, looking back, it needs to be done 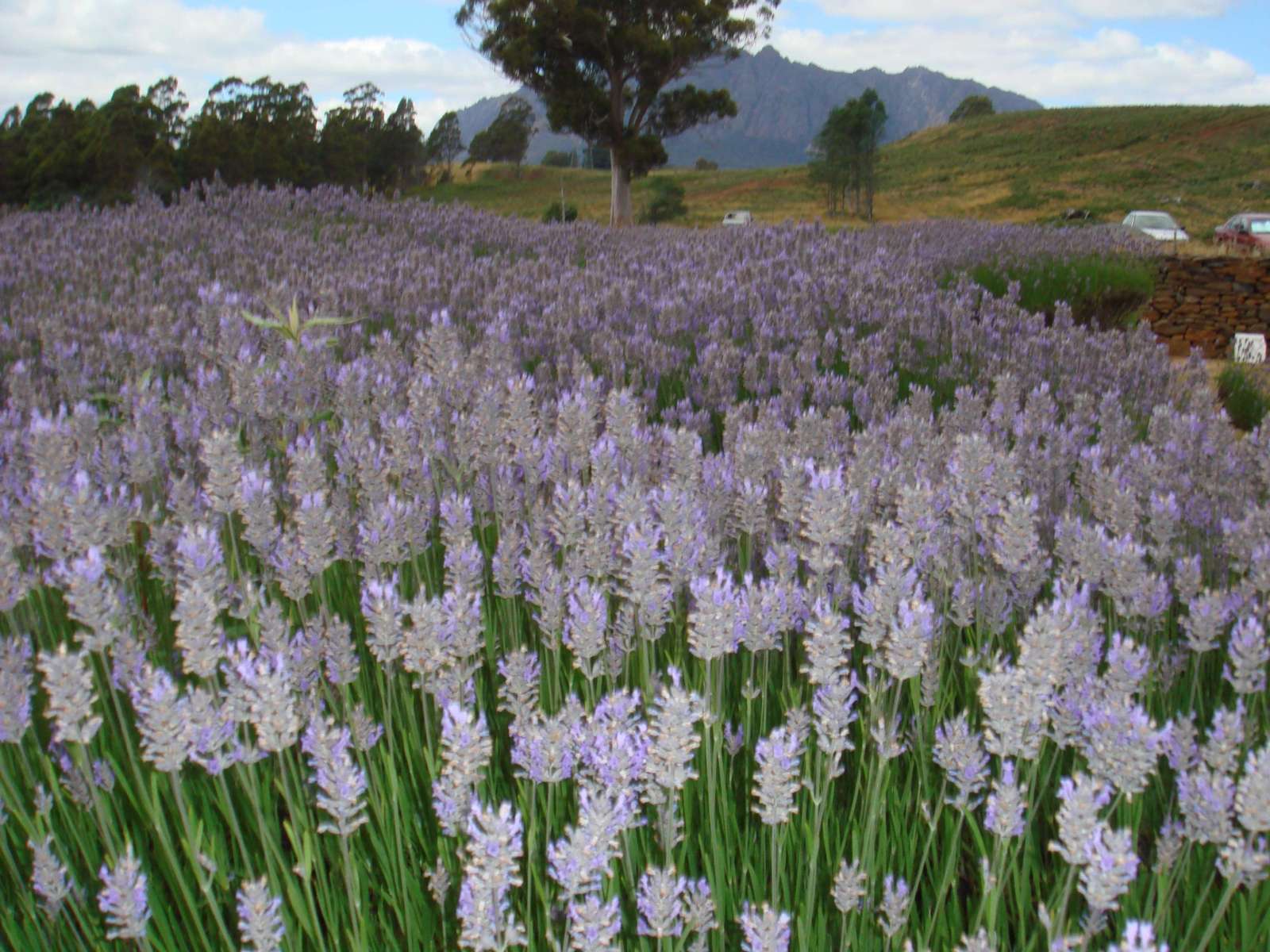 A bit cheesy, but really good fun.  Tasmazia features 8 mazes, one of which is The Great Maze which used to be the world’s largest; a cute model village in the centre called Lower Crackpot; and all within the quite stunning backdrop of Cradle Mountain and the Tasmanian Lake District.  Surprisingly good fun getting lost in amongst it all, and make sure to fill yourself up on the giant pancakes in the cafe

Some may be a bit surprised as to why Macquarie Harbour gets such a high score, especially considering the world-class travel experiences that share this placing in the rankings.  To explain it, and why it is such a gem, consider a few factors: 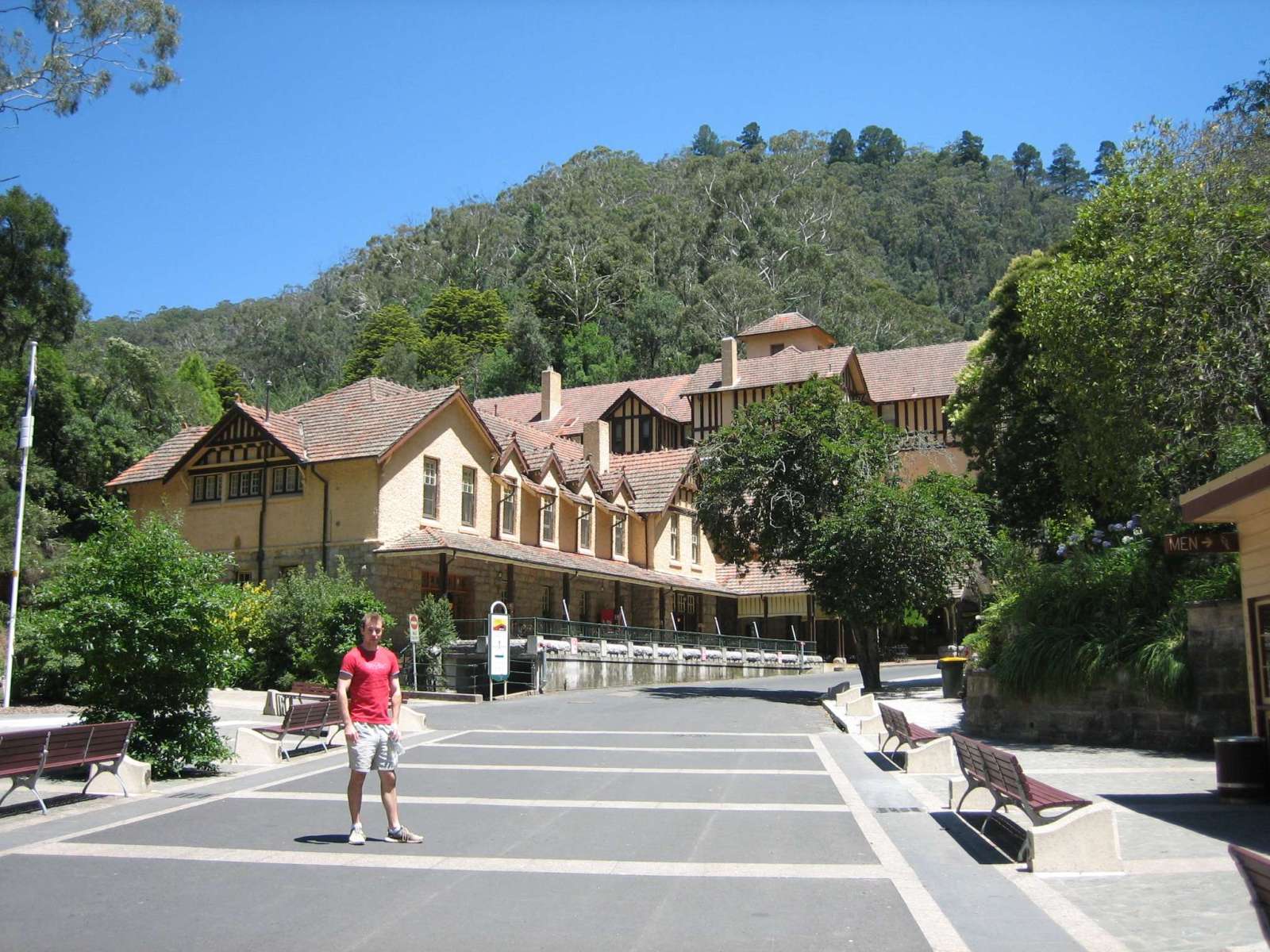 I saw the Jenolan Caves listed as one of the highlights of the Blue Mountains area, but found them to be a little underwhelming.  Perhaps it comes down to which caves you visit on the day, but I found them far behind the stunning views around Katoomba and, what doesn’t help, an hour further away from the main attractions and relatively busy / crammed in when you get there.  Pretty surrounding countryside though 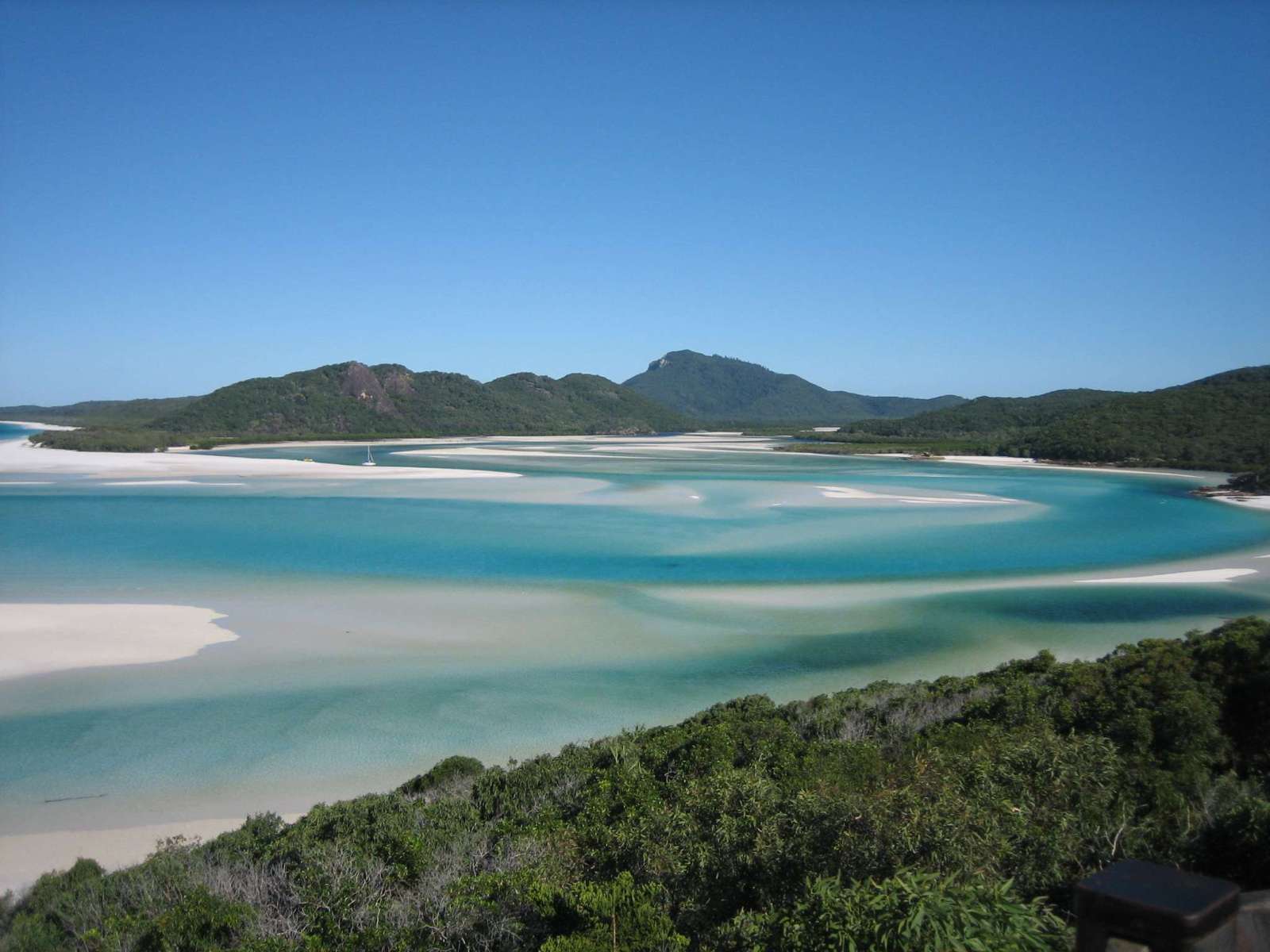 The Queensland coastline includes some of the highlights for the whole country and, with world-class beach experiences such as 4WDing on Fraser Island, sailing the Whitsunday Islands and diving the Great Barrier Reef, it is one of the premier coastal roadtrips in the world.  Throw into the mix the the hedonistic glitzy skyscraper Gold Coast, the natural phenomenons of the Daintree Rainforest and Atherton Tableland, chilled out islands like Great Keppel and Magnetic Islands, plus the very Australian quirky habit of needing each town to have its own “Big Thing” (think giant prawns, bananas, mangos etc), and you’ve got an unmissable experience

Itinerary below for a 3 week trip and 3 top tips: 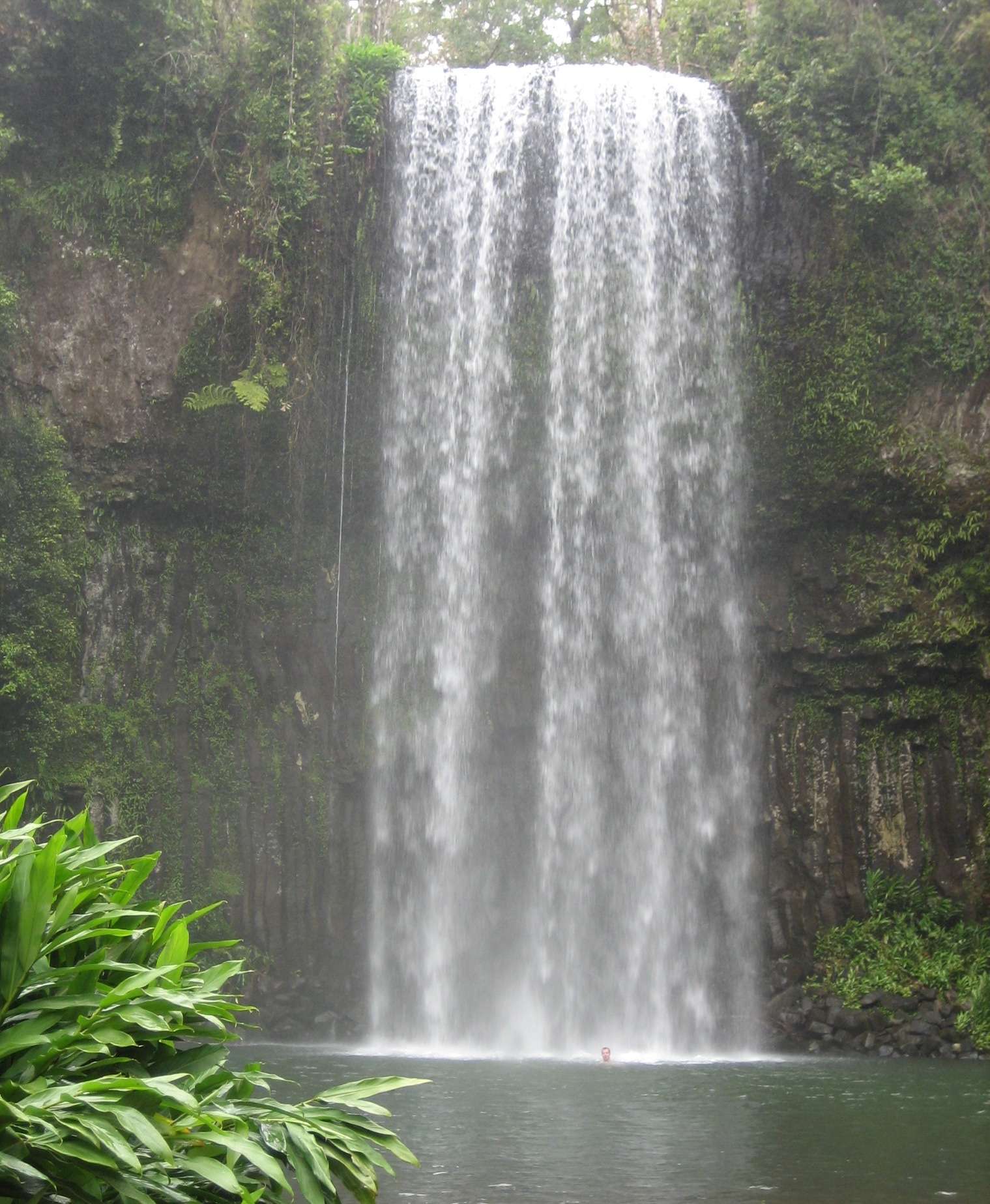 If driving along the standard East Coast of Australia route, I’d highly recommend taking the short detour slightly inland for the Atherton Tableland.  The higher altitude (the tableland is home to Queensland’s highest mountains of Bartle Frere at 1622m and Bellenden Ker at 1593m) makes for a pleasant break from the oppressive heat of the coastline and also fellow tourist numbers drop off dramatically.  Give yourself half a day to drive through the pockets of rainforest and see / swim in the magnificent waterfalls dotted all through the area 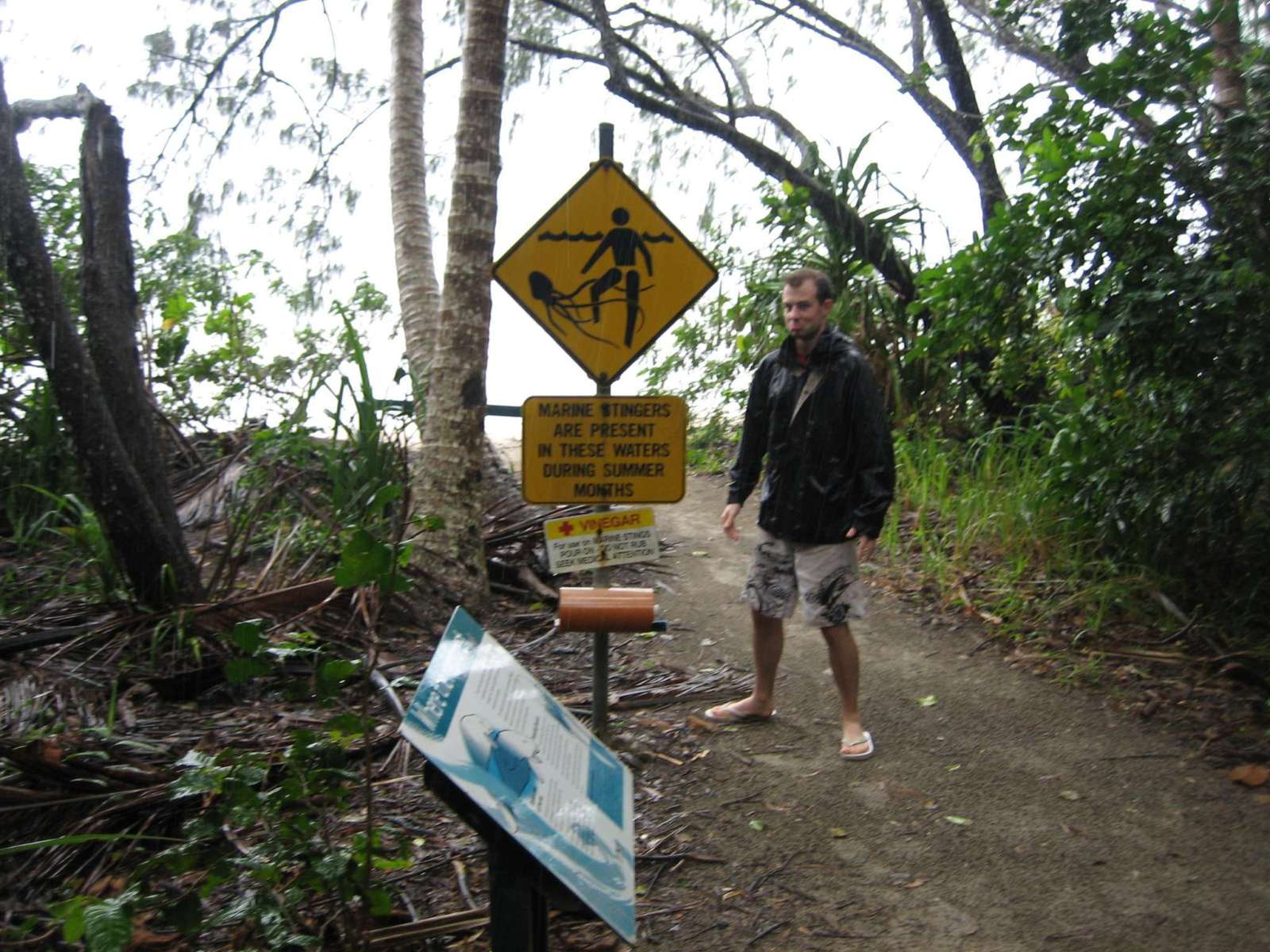 For most people, the Australian East Coast trip ends at Cairns as it’s the last town to fly back from.  But, if you continue just another couple of hours north you hit the UNESCO World Heritage listed Daintree Rainforest which is the oldest continually surviving tropical rainforest in the world.  The whole north trip from Cairns feels like you’re escaping the well trodden tourist path as you need to cross flooded roads, say goodbye to electricity from anything other than generators and leave yourself open to nature.  You have jellyfish stopping you swimming in some places, the constant sound of birdsong and insects of the jungle, and frogs getting just about everywhere.  A real getting back to nature experience – but prepare to get very very wet!